By selecting our low sound options, unforeseen noise such as humming and buzzing will not become a problem especially if you are considering a cooling tower that will be in the vicinity of large groups of people. To appreciate the surprising difference between decibel levels, Temple University Department of Civil/Environmental Engineering describes the difference between decibels:

the equivalent of whispering

the equivalent of a quiet suburban home

the equivalent of a conversation in a restaurant

the equivalent of a vacuum cleaner

the equivalent of a food blender 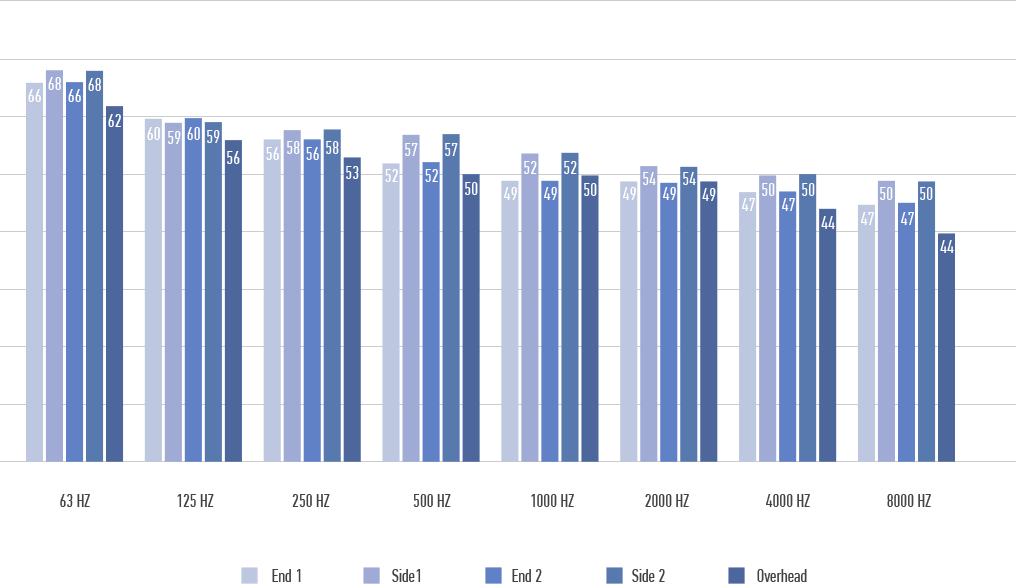 HDPE Cooling Towers Get the Noise Out

Imagine attending a symphonic concert, and right in the middle of a violin solo you hear a rushing sound penetrating the ceiling above the orchestra and overwhelming the concert hall’s painstaking acoustic design.

Or, perhaps you are performing surgery in a medical center suite or giving a business presentation in the penthouse conference room of an office building and that same rushing noise, generated by the facility’s HVAC cooling tower, infiltrates the environment, leaving attendees somewhat distracted and annoyed.

That rushing or ringing sound is composed of airflow noise generated by air turbulence at Cooling Tower fans and water flowing through the cooling tower into the collection basin and finding a solution can be difficult and expensive unless a more advanced cooling tower technology is applied.

In the case of the Symphony Hall at The Woodruff Arts Center the noise was coming from conventional cooling towers located on the roof directly above the concert hall. The sound was similar to that of a jet aircraft passing over the Memorial Arts Building where the Atlanta Symphony performs on the top floor.

According to Steve Trott, Director of Engineering, “Our old, metal cooling towers were ‘end of life,’ and so we knew that we had to replace them soon. We considered typical metal towers, stainless steel, partial stainless steel. Then we looked at the HDPE-based cooling towers. We found those cooling towers were very quiet, and would provide the sound insulation needed without having to go to a special quiet tower package, which would really increase the cost.”

The HDPE (high-density polyethylene) was pioneered by Delta Cooling Towers, primarily to solve corrosion problems, which have plagued metal towers due to problems such as soft water and ambient factors such as salt air or caustic industrial gasses. While the dramatically improved lifespan of these HDPE towers have been a major factor in purchasing decisions for years, more recently the quieter operation has taken on significant importance for many applications.

Getting Rid of the Decibels

The “noise pollution” of commercial HVAC equipment has become an increasingly unwanted problem for communities across the nation in recent years. For example, the Franklin Institute building in Philadelphia recently replaced its cooling towers, and by city ordinance was mandated to restrict the sound output to less than 50 decibels, which is less than the normal noise output of a traditional cooling tower.

“In many cities businesses are encroaching on residential areas, and some cities require that new office buildings incorporate residential spaces in the top portions of the buildings,” says Trott.“ Certainly the occupants of those expensive spaces don’t want to hear the noise of cooling towers.”

Trott adds that his new cooling towers feature variable-speed fan drives, which provide very smooth operation and very consistent water temperature. During the first summer of operation, most of the time the fans were running at 50 percent speed or less, which was more economical.
The cooling towers that Woodruff Arts Center selected for the symphony hall building were two sets of twin-cell Delta TM Series 500-ton models, each featuring a 20-year warranty on corrosion or other physical damage.

Use our directory to find a local Delta Rep.

Complete this easy form to request a quote.