High-efficiency plastic modular cooling towers provided a virtually maintenance-free HVAC solution that will last at least 20 years and was a breeze to install. 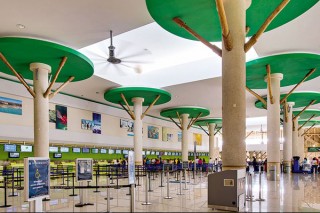 A dramatic rise in the popularity of the Dominican Republic as a resort destination has led to the expansion of the principal airport serving the island’s eastern provinces, Punta Cana International Airport.  With over 6,500 visitors arriving at this facility daily, Punta Cana serves as a destination for 53 different airlines from over 40 countries. The expanded international terminal (Terminal B) is the leading point of entry in number of arriving passengers in the Dominican Republic. It is also the country’s fastest growing airport with almost a 20% increase in traffic yearly, which indicates that in four years the aircraft traffic will double.

All of this activity necessitated a complete airport expansion and modernization. What was once a traditional Dominican-style airport with open-air terminals and roofs covered with palm fronds is transforming to a contemporary facility with enclosed, air-conditioned buildings.  The newest of these is the 70,000 square meter international terminal, which was recently completed. Since the structure is within a kilometer of the ocean off Punta Cana’s eastern shoreline, it was important to consider the choice of cooling towers that support the chillers for the terminal’s HVAC system.

Cooling tower operating efficiency and reliability were also issues because, with tropical temperatures averaging 80 degrees F, the air conditioning system would be running year-round.  “Our primary concern was that rust and corrosion problems due to the salt air would plague a conventional metal-clad cooling tower,” says Jorge Miranda, Business Development Manager at INICA the mechanical contractor that specified and installed the entire HVAC system. “This would eventually interfere with running the air conditioning system and would also require expensive maintenance or replacement.”

Selecting an appropriate cooling tower was a special consideration due to The Dominican Republic’s year round high ambient temperatures. Also, an engineered plastic tower would be effective in handling the stiff gusts of corrosive salt air that blows in off the surf surrounding Punta Cana. Conversely, wind-blown salt and other corrosives are the archenemy of traditional metal clad cooling towers, which often require much maintenance such as re-sheeting, welding and rebuilding within just a few years as a result.

The cooling tower Miranda selected was a high-density polyethylene (HDPE) TM Series modular tower manufactured by Delta Cooling Towers. Delta manufactures a variety of engineered plastic models ranging from 10 to 2500 cooling tons. The tower Miranda installed at the airport features three modular cells and provides 750 cooling tons. “With the double-wall HDPE shell we are confident that this tower will be impervious to rust and corrosion problems,” Miranda says. “Also the Delta TM Series features a direct drive motor which should mean easier maintenance and lower energy consumption.” Like other Delta cooling tower models, the TM Series cooling towers carry an unprecedented 20-year warranty.

The ease of installation of the three-cell cooling tower was also an unexpected benefit. “One of the things I like most about these cooling towers is the ease of assembling them at the project site,” Miranda explains. “In the case of the airport terminal, we were able to assemble and install the three cooling tower cells in just 24 hours. Because they were pre-assembled at the factory, and we only had to deal with two sections for each cell, and that was easy to do using only a ladder. Even the direct-drive motors were pre-installed. This was quite beneficial since other cooling towers that we have looked at are shipped to the job site in many pieces, and assembling them will take two or three days to install just one cell.”

Maintenance is another positive. Not only will the corrosion problem of the salt air be prevented, but also the simplicity of the direct- drive fan drive system will require minimal service. “The cooling tower has been installed for a year now, and we haven’t had a single service call yet,” Miranda says.

Now that the new International Terminal is completed, the Punta Cana airport is undertaking the modernization of its main terminal, a project that will take about a year. A new HVAC system will be part of the program, and INICA will handle that project. “I don’t think there’s any doubt about it, we’ll be installing another TM Series modular cooling tower system,” notes Miranda.