With heat playing a major role in all chemical processing operations, it's hard to find a plant today that doesn't have a cooling tower or two on the roof, or somewhere on the facility grounds. That is because any process that generates heat either directly or reactively, will also generate waste heat or the requirement for cooling. 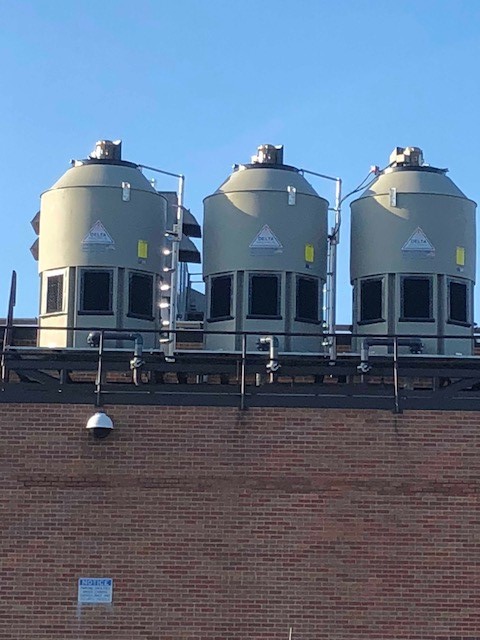 Whether applied directly to heat exchangers, equipment jacket coolers, oil cooling, quenching baths, annealing furnaces, sterilization apparatus, pasteurization systems, or air compressors, protecting expensive process equipment and maintaining cooling fluids represent an indispensable adjunct for any process operation. Without fail-safe and efficient cooling towers, capital-intensive processing operations would have unscheduled maintenance shutdowns with unrecoverable production losses and delayed shipments that could lose customers. Unfortunately, however "traditional" metal-clad cooling towers used to handle the heat, are also under attack from all sides, particularly in the process industries. Not only are exorbitant maintenance costs and disruptions making those classic zinc-plated models outmoded, but the very laws or nature seem to work against metal cooling towers for a wide variety of industrial applications. "Metal-clad cooling towers are being eaten alive by harsh environments," says Jim Ruddy, president of Proprietary Systems, Inc. Westlake Village, California.  "They rust and corrode all the time. They are attacked internally by process chemicals and externally by environmental elements. Metal towers can also corrupt processes, causing headaches that can cost thousands of dollars many times over."

Having come from the metals processing industry, Ruddy received a first-hand education in the disruptions and expenses that can result from problematic metal cooling towers. "In our business we used big power supplies for heating and melting through induction," Ruddy explains. "Metal cooling towers were plagued by rust and corrosion. Rust would get into the water system and lodge in an SCR (silicon-controlled rectifier) and short it out. Poof - there goes another $2,000 SCR. The maintenance guys sometimes changed SCRs like light bulbs."

The natural and mortal enemy of metal-clad cooling towers is pH, usually on the low side. A high pH leads 10 excessive calcium and other ceramic-like deposits. When the pH of a liquid coolant becomes acidic (low), either because of external (e.g. atmospheric) elements or infiltration of process elements {e.g. material fines), the veneer of zinc galvanizing used on most metal towers immediately begins to deteriorate. Because the zinc plating is thin (normally a scant 2.5 oz per sq. ft.), a pH lower than 4 will destroy this protective lining in a matter of months. At that point contractors are required to replace the zinc galvanizing by expensive coatings and repair any cavities and other damage that may have
occurred.

The inherent susceptibility of metal cooling to high and low pH has led 10 the development of a new technology that is rapidly replacing the older one, particularly in the process industries: the engineered plastic cooling tower. Composed of material that is literally impervious to the harsh pH environments that devastate metal cooling towers, engineered plastic cooling towers are energy efficient, available in a wide array of capacities and air flows, and will operate with both process and energy efficiency for many years.

"There is simply no way that we would use a metal cooling tower," says Doug Martin, vice president and operations manager at H. J. Baker & Brothers' Wilmington, California plant. A leading supplier of prilled sulfur for the agri­cultural trade, H.J. Baker & Bros processes over 250,000 tons of sulfur a year at two California facilities. "We spray molten sulfur into cool water in the prilling process." Martin explains, "A cooling tower is needed to chill the process water after the sulfur bath. While the process water is part of a separate system, it becomes somewhat corrupted by minute sulfur fines in it. Those sulfur fines make the cooling system water highly acidic." Marlin says that the sulfuric water would attack any metal surface it contacts. For that reason, the plant uses Delta engineered plastic cooling towers, and was able to get 20 years’ worth of very aggressive service from the first installed unit. With so many inherent vulnerabilities, metal-lined cooling towers generally carry only a one-year warranty.

Ramcar, a major manufacturer of car batteries uses an engineered plastic cooling tower to protect against the ravages of sulfuric acid at its City or Commerce, California plant. "We use relatively high concentrations or sulfuric acid (25-35%) mixed with the water used in our batteries," explained Larry Eslao, chief engineer. "This mixture gets very hot, so we designed our process to run the mixture through a cooling tower. Of course, with such a harsh mixture we would not want to use a metal clad tower, which would have a very short lifespan. We purchased this Delta plastic model because it is impervious to acid. We bought our present tower in 1987; it has proved to be virtually maintenance free."

Cooling towers cool water through heat transfer and evaporation. With a loss of 1% water for every 10°F of cooling required, the evaporation factor can be very significant - 20 or 30 gpm is not uncommon for small towers. When evaporation occurs, scale is left behind, which can interfere with cooling tower effi­ciency and require expensive maintenance or acid cleaning. Because plastic cooling towers are impervious to residual salts, they cannot damage the tower and the tower can be cleaned up by simply washing down the plas­tic surface with a hose.

"The plastic tower is not affected by pH," says Ruddy. "A high pH is going to result in salts collecting in the tower. You may have to use very aggressive cleaning chemicals to dis­solve the salts. In a metal tower that is designed with seams that come down as a right-angle, powerful cleaners will penetrate those seams. Then, after cleaning, a base is added to neutralize the acid and bring the pH back up. But the bases don't penetrate. so the acid remains in the seam. So. you have a flange on a metal tower and the acid sits in 1he seams. working on the thin galvanizing and eroding it."