Thinking Outside the (Metal) Box

Thinking Outside the (Metal) Box 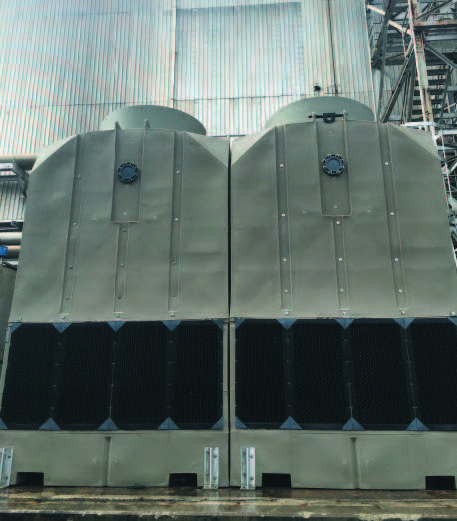 HVAC systems play a crucial role in many industrial cooling applications. These systems—composed of cooling towers, chillers, and air handlers—are used to cool areas where high heat loads can shut down critical processes. High heat loads could stem from machinery that generates extensive heat, or where cooling and ventilation are required to protect temperature and humidity-sensitive equipment. In the case of one large containerboard mill, a primary cooling tower, along with other HVAC apparatus, is vital to keeping the electrical equipment rooms cooled. These enclosures hold heat-sensitive instrumentation used to monitor and control essential plant operations.

The mill, located in southern Mississippi, is operated by one of the world’s leading producers of tissue, pulp, paper, and packaging, and is one of the largest producers of containerboard in the US. The mill recently needed to replace the cooling tower used for its electrical rooms, along with an additional tower that supplied comfort air to the building’s offices. Both cooling towers were the classic metal-clad design framed with wood, and were beginning to disintegrate.

“Our cooling towers were maintenance intensive and getting to be unreliable,” explains Brian Lloyd, an electrical and instrumentation planner for the mill. “So, we decided to immediately replace the two that were integrated with the HVAC equipment.” Cooling towers have undergone substantial design changes over the years since the mill last required a replacement. To evaluate the different options that would best fit their application, Lloyd consulted with experts in custom engineered systems, including Russell Cready of Tencarva Machinery Company, an equipment distributor that serves the southeastern United States.

“In addition to all of the standard functional necessities, there were a few other specific requests that the mill’s engineers stressed would be required in any new cooling tower package,” Cready says. “Those included lower maintenance costs, longer lifespan, and operational cost savings.”

AVOIDING THE PITFALLS OF METAL

Cready was well aware of the drawbacks of the metal-clad type of cooling towers that the mill wanted to replace. Among these is the frequent need for costly maintenance due in part to the fact that they are highly susceptible to corrosion. They tend to require repeated and expensive repairs such as re-sheeting and welding, as well as expensive water treatment chemicals. “Servicing some metal-clad cooling towers can be a nightmare,” Cready says. “Some models have thousands of nuts and bolts that can slow repairs to sometimes weeks, which means a lot of downtime.”

After reviewing the mill’s cooling tower replacement priorities, Cready proposed using engineered plastic cooling towers made out of high-density polyethylene (HDPE). These towers are impervious to weather, caustic conditions, and water treatment chemicals that plague metal-clad cooling towers. HDPE cooling towers do not rust or corrode, which eliminates the need for costly repairs and downtime. Cready recommended, and the mill’s facility engineers elected to install, cooling towers manufactured by Delta Cooling. The company pioneered the HDPE plastic cooling design in the 1970s, and offers a 20-year factory warranty.

The mill’s second requirement—a long cooling tower lifespan—is an inherent benefit of HDPE construction. The Mississippi mill selected Delta’s TM Series, an induced draft, counter-flow design available in single unit capacities from 250 to 2,500 cooling tons. The TM Series offers a unique modular design that allows the cooling towers to be assembled in multiple configurations of up to six units. “This modular design is appealing to many users because it makes it easier for them to add on to the existing towers to meet future cooling needs,” Cready says. Lloyd adds that, because the new cooling towers are self-contained and factory assembled, installation inside the mill was far easier and less intrusive. “Installation didn’t require using a big crew, so we had only a few people coming in and out of the facility, which helped reduce any disruptions to plant operations. In this case, the installation was completed in just a few hours.”

The design of the two new cooling towers promises to add substantial operating savings to the plant. For example, in addition to the HDPE structural material, the towers’ “plumbing” features totally enclosed, non-corroding PVC pipe and non-clog spray nozzles, which will further reduce maintenance costs. The old metal-clad tower that had formerly supported the HVAC system supplied to the electrical rooms had an exterior containment pond, which is no longer required because the new towers are self-contained. “That eliminates a troublesome chore: keeping the pond free of dust and debris that often traveled from our equipment into the containment water,” says Lloyd. “Also, we no longer have the need to treat that water with expensive chemicals.” Lloyd also noted that the new cooling towers are more efficient and consume less power. “The blowers are independent,” he explains. The old metal-clad tower had one big fan on top, so we’d need to shut the tower down and deal with a big 60 hp motor with a large fan on top. Now, with the independent fans, which are much smaller, if you have one go out they are simple to replace, which saves time and material costs.”